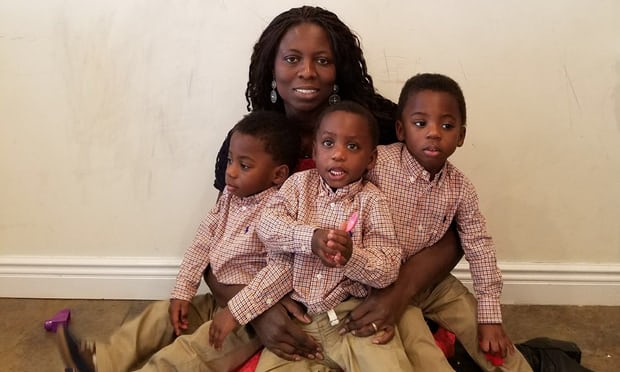 Our company receives many inquiries like this. Stella had approached us last April, emotionally distraught over the thousands of dollars in medical bills she was receiving related to the premature birth of her triplets. One of our expert medical billing advocates was assigned to take her case. She was very happy with the favorable outcome (a reduction in her final balance by an incredible amount), and so were we. Like Stella, we may be able to help you too.
The US is the most expensive nation in the world in which to have a baby – and it may factor into thousands of bankruptcies each year.
Tue 16 Jan 2018
Jessica Glenza in New York – The Guardian

Stella Apo Osae-Twum and her husband did everything by the book. They went to a hospital covered by insurance, saw an obstetrician in their plan, but when her three sons – triplets – were born prematurely, bills started rolling in.
The hospital charged her family $877,000 in total.
“When the bills started coming, to be very honest, I was an emotional wreck,” said Apo Osae-Twum. “And this is in the midst of trying to take care of three babies who were premature.”
America is the most expensive nation in the world to give birth. When things go wrong – – from preeclampsia to premature birth – costs can quickly spiral into the hundreds of thousands of dollars. While the data is limited, experts in medical debt say the costs of childbirth factor into thousands of family bankruptcies in America each year.
It’s nearly impossible to put a price tag on giving birth in America, since costs vary dramatically by state and hospital. But one 2013 study by the advocacy group Childbirth Connection found that, on average, hospitals charged $32,093 for an uncomplicated vaginal birth and newborn care, and $51,125 for a standard caesarean section and newborn care. Insurance typically covers a large chunk of those costs, but families are still often on the hook for thousands of dollars.
Another estimate from the International Federation of Health Plans put average charges for vaginal birth in the US at $10,808 in 2015, but that estimate excludes newborn care and other related medical services. That is quintuple the IFHP estimate for another industrialized nation, Spain, where it costs $1,950 to deliver a child, and the cost is covered by the government.
Even the luxurious accommodations provided to the Duchess of Cambridge for the birth of the royal family’s daughter Princess Charlotte – believed to have cost up to $18,000 – were cheaper than many average births in America.
Despite these high costs, the US consistently ranks poorly in health outcomes for mothers and infants. The US rate of infant mortality is 6.1 for every 1,000 live births, higher than Slovakia and Hungary, and nearly three times the rate of Japan and Finland. The US also has the worst rate of maternal mortality in the developed world. That means America is simultaneously the most expensive and one of the riskiest industrialized nations in which to have children.
American families rarely shoulder the full costs of childbirth on their own – but still pay far more than in other industrialized nations. Nearly half of American mothers are covered by Medicaid, a program available to low income households that covers nearly all birth costs. But people with private insurance still regularly pay thousands of dollars in co-pays, deductibles and partially reimbursed services when they give birth. Childbirth Connection put the average out of pocket childbirth costs for mothers with insurance at $3,400 in 2013.
In Apo Osae-Twum’s case, private insurance covered most of the $877,000 bill, but her family was responsible for $51,000.
Apo Osae-Twum was the victim of what is called “surprise billing”. In these cases, patients have no way of knowing whether an ambulance company, emergency room physician, anesthesiologist – or, in her case, a half dozen neonatologists – are members of the patient’s insurance plan.
Even though Apo Osae-Twum went to a hospital covered by her insurance, none of the neonatologists who attended to her sons were “in-network”. Therefore the insurance reimbursed far less of their bills.
There are few studies that estimate the number of families who go bankrupt from this type of unexpected expense. One of the best estimates is now outdated – conducted 10 years ago. But one of the authors of that research, Dr Steffie Woolhandler, estimates as many as 56,000 families each year still go bankrupt from adding a new family member through birth or adoption.
“Why any society should let anyone be bankrupted by medical bills is beyond me, frankly,” said Woolhandler. “It just doesn’t happen in other western democracies.”
Since Woolhandler conducted that research in 2007, 20 million Americans gained health insurance through the Affordable Care Act health reform law, and consumer protections were added for pregnant women. But Republicans and the Trump administration have pledged to repeal these consumer protections.
“People face a double whammy when they’re faced with a medical condition,” said Woolhandler. Bankruptcy is often, “the combined effect of medical bills and the need to take time off work”.
There is no nationwide law that provides paid family leave in the US, meaning most families forego income to have a child.
And although childbirth is one of the most common hospital procedures in the nation, prices are completely opaque. That means Americans don’t know how much a birth will cost in advance.
Dr Renee Hsia, an emergency department physician at the University of California San Francisco and a health policy expert likened the experience to buying a car, but not knowing whether the dealership sells Fords or Lamborghinis. “You don’t know, are you going to have a complication that is a lot more expensive? And is it going to be financially ruinous?”
According to Hsia’s 2013 study, a “California woman could be charged as little as $3,296 or as much as $37,227 for a vaginal delivery, and $8,312 to $70,908 for a caesarean section, depending on which hospital she was admitted to.”
Apo Osae-Twum and her family only found relief after a professional medical billing advocate agreed to take their case. Medical Cost Advocate in New Jersey, where Derek Fitteron is CEO, negotiated with doctors to lower the charges to $1,300.
“This is why people are scared to go to the doctor, why they go bankrupt, and why they forego other things to get care from their kids,” said Hsia. “I find it heartbreaking when patients say… ‘How much does this cost?’
https://www.theguardian.com/us-news/2018/jan/16/why-does-it-cost-32093-just-to-give-birth-in-america?CMP=fb_gu

Changes to the Affordable Care Act